You can read and share this email on the web: https://notes.itsgoodtobeaman.com/aimee-byrd-accidentally-promotes-our-book-to-bestseller/

This week we bumped Tim Keller off Amazon’s top spot in Presbyterian books. We thought this was pretty funny given the implication that we are thus more winsome than Keller: 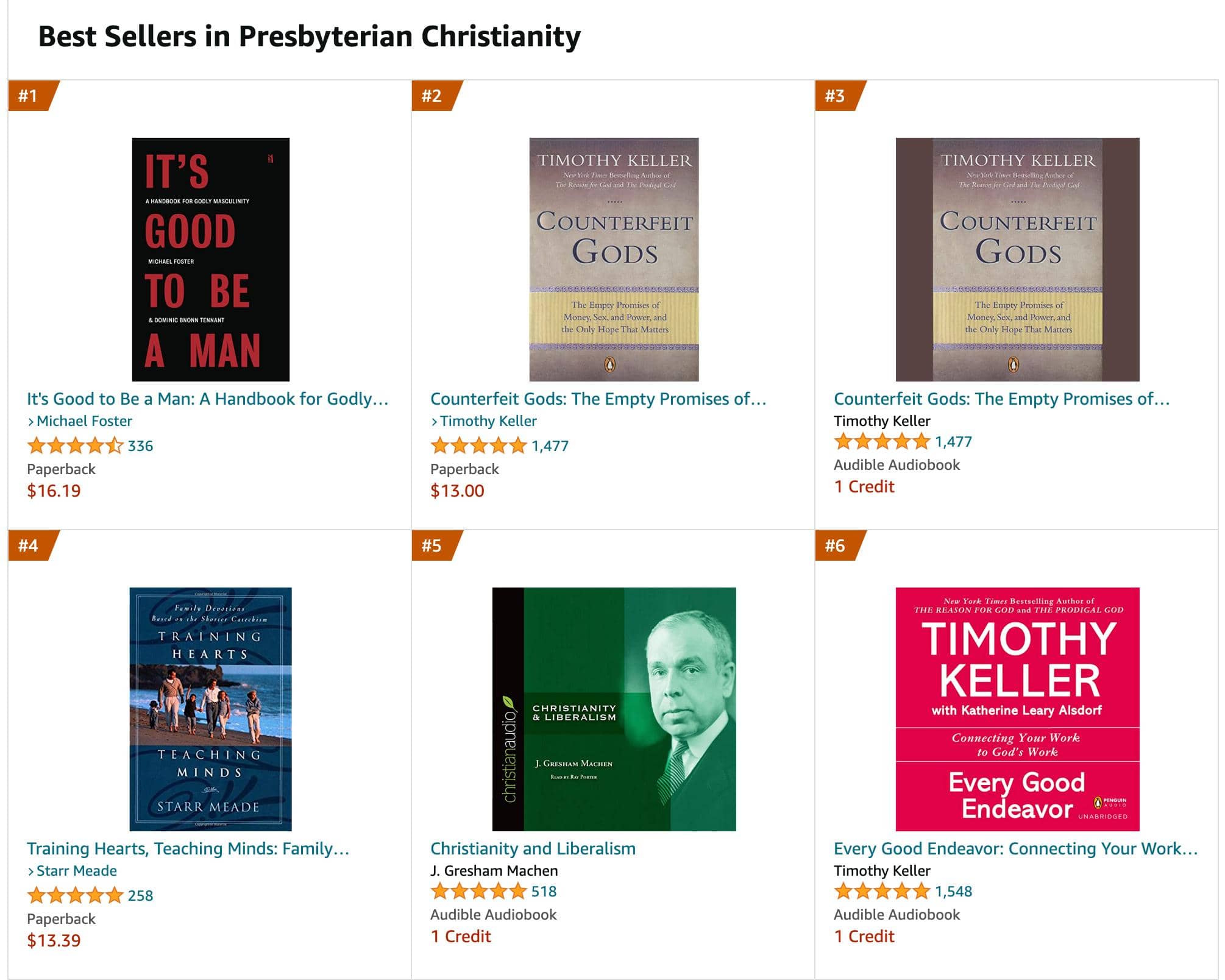 Long-time aspiring pastoress Aimee Byrd was very anxious to get the word out about this. She wanted everyone to know that we are not on the fringe of Presbyterianism any more. This was a relief, honestly, as a few notable figures have said otherwise: 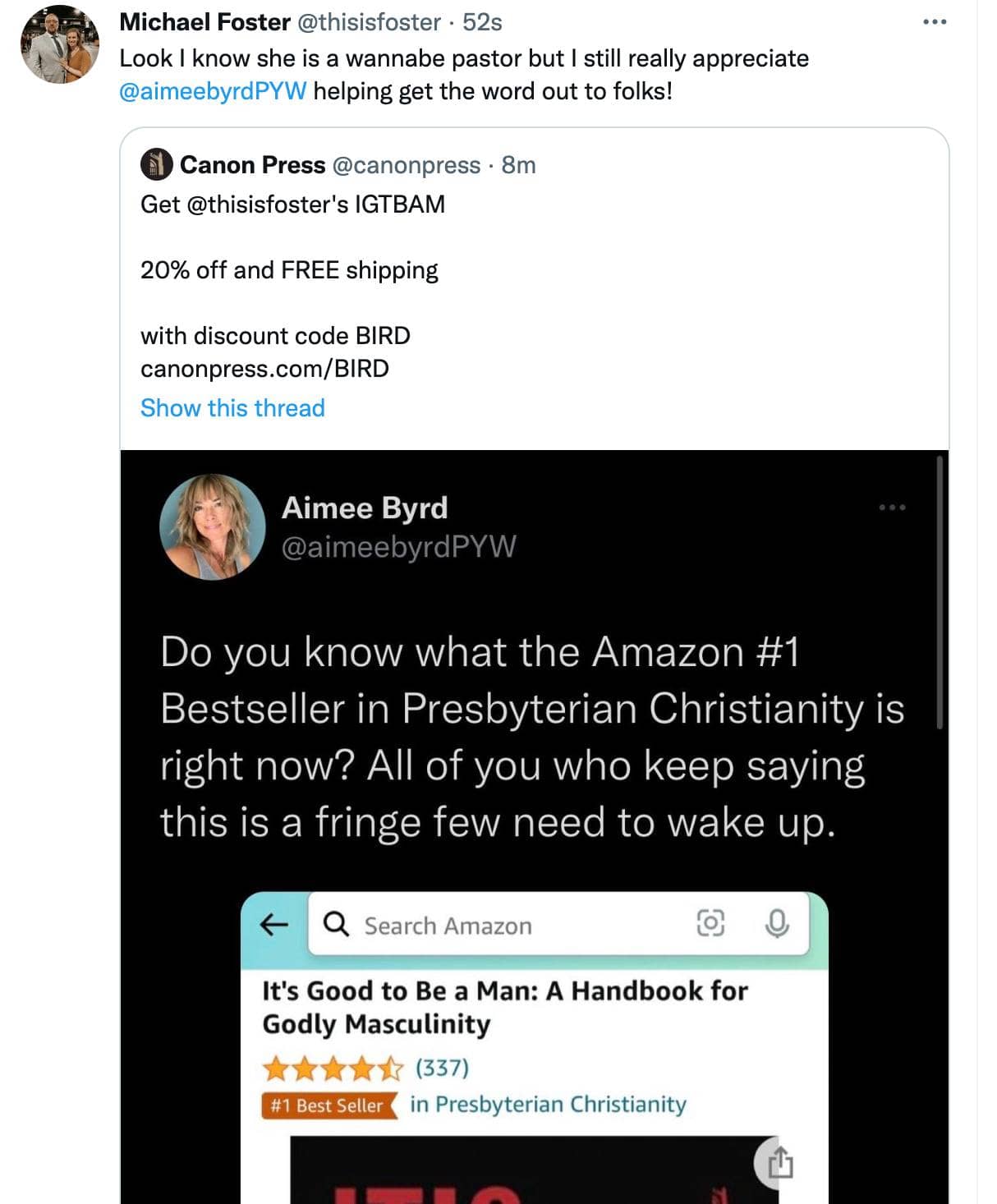 Mrs. Byrd apparently forgot to read the manual before using the internet, and was surprised to discover that her sincere warning about folks avoiding our work caused our popularity and influence to grow.

In fairness, crying harder has been a winning strategy for her in the past.

Since her tweet went viral, our book has now been bumped up to #1 in Men’s Christian Living too. Thanks Mrs. Byrd—and thanks everyone who purchased a copy! 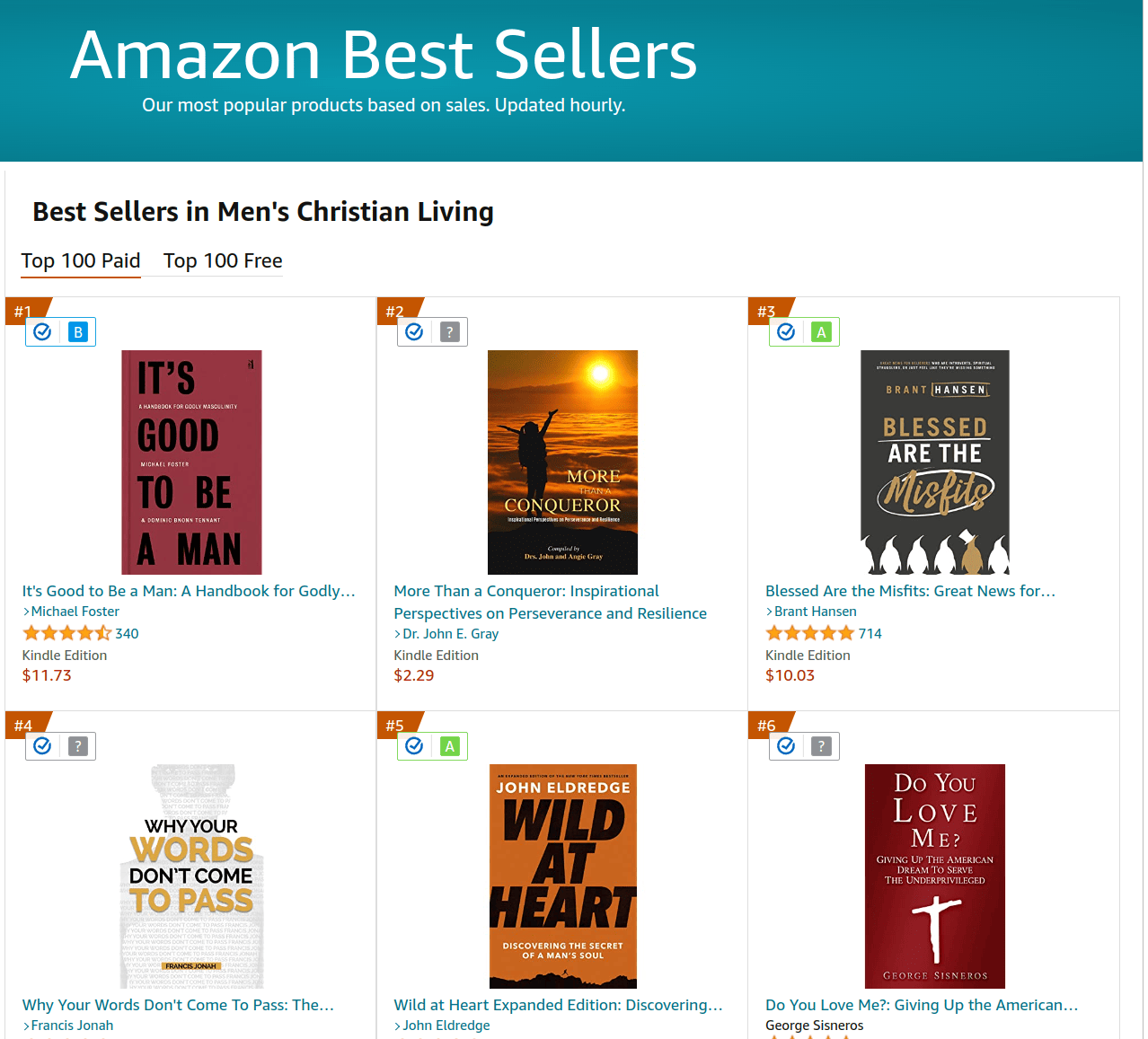 If you don’t have a copy of IGTBAM yet, why not help keep us ahead of Keller, and keep the huffy ladies huffy? Use the discount code BIRD to get 20% off through August 11:

Buy from Canon Press for 20% off

Unfortunately the discount doesn’t apply internationally, so if you are somewhere other than the greatest nation on earth (Bnonn writes from New Zealand, chuckling to himself), check out other buying options on our book site »

And if you’re looking for some light entertainment while waiting for the book to arrive, check out the world-class trolling in the comments of Mrs. Byrd’s tweet, or the quote tweets. Just remember, if you decide to comment, don’t break any commandments (except the 11th).

A reader sent us this remarkable story. Please pray for his situation, and especially for his drill sergeant—that God would open her heart to receive the gospel, and grant her repentance:

I bought your book before leaving for Army Basic Combat Training but I left it home since books weren’t allowed.  My wife noticed and began ripping out chapters and mailing them to me.

One night when I was on fire guard duty I left the chapter on gravitas at the desk; the next morning a female Drill Sergeant picked it up and asked whose it was.  I thought I was about to get smoked but then she started reading it while I stood silently at ease.  She smirked at the book title but as she skimmed through the chapter she became more interested.  She was surprised it was a Christian book and asked some good questions about biblical masculinity.  I was able to talk about your ministry and Christ.

Imagine, a feminist female drill sergeant reading a chapter on gravitas in a book called It’s Good To Be A Man.  I’m blessed to have an amazing wife who not only supported me through basic training but found a way to send me your book with actually sending me your book.

Back in 2003, Robbie Lowe wrote a helpful article in Touchstone on the importance of fathers to churchgoing. In it, he explains:

In 1994 the Swiss carried out an extra survey that the researchers for our masters in Europe (I write from England) were happy to record. The question was asked to determine whether a person’s religion carried through to the next generation, and if so, why, or if not, why not. The result is dynamite. There is one critical factor. It is overwhelming, and it is this: It is the religious practice of the father of the family that, above all, determines the future attendance at or absence from church of the children.

But doesn’t the mother play a role? Lowe comments:

In terms of commitment, a mother’s role may be to encourage and confirm, but it is not primary to her adult offspring’s decision. Mothers’ choices have dramatically less effect upon children than their fathers’, and without him she has little effect on the primary lifestyle choices her offspring make in their religious observances.

Even long before scientific studies, churchmen knew the straight connection between fathers and the well-being of their households. J.W. Alexander, for example, preached that:

There is no member of a household whose individual piety is of such importance to all the rest as the father or head. And there is no one whose soul is so directly influenced by the exercise of domestic worship. Where the head of a family is lukewarm or worldly, he will send the chill through the whole house.

The truth of this sinks in when we consider Scripture’s own description of households as bodies. The father is the head; the rest of the house is his body. But this means that while a lukewarm father sends a chill through his house, there is nothing so chilling as the cold reality of a home without any father at all. Its icy effects are sobering. In his book Fatherless Generation, John Sowers reports that children from fatherless homes account for:

Because the father is the head, as he goes, so goes his household. And as households go, so goes society. The benevolent presence of a father results in a more orderly and fruitful life. His absence, whether by distance or abdication, results in disorder and chaos.

A reader follows up these statistics with a poignant anecdote, which we paste here without adjustment:

I would like to share a quick piece of anecdotal evidence to support the supposition and also show the importance of the wife and mother in her role as Helpmeet.

I know two men. Both retired military. Both made numerous extended deployments. Both married for 20yrs. One had 3 children and the other 4. Both made constant, habitual efforts to stay in contact with their family while deployed and took their children to church when home.

The wife of the first and mother of 3 would set a place at the head of the table for supper every night as a reminder that their dad was still the Head of the family and they would still eat as a family around the table. She would read the letters he had written each of the kids to them when they were young and when they got older they would have a family time of sharing them together. She took them to church and kept them in the other church activities. She made a concerted effort to maintain the home as if he were right there. Always reminding them your father this and your father that.

The wife of the second and mother of 4 rarely mentioned the father to the children. They didn’t gather around the table but rather around the TV & Nintendo if they gathered at all. She never took them to church and didn’t even ensure they went to school. The letters written to her each day and to each of the children at least once a week, some of them containing cassette recordings to then as he went about his day, were not read together and shared as a family. In fact, he came home to find a tall pile of them that had never even been opened. All the things he had put in place were forgotten when he left and life became all about the children and what they wanted.

The 3 children of the first grew up, graduated high school, went on to college, and then serve in the military themselves. At least 2 of them becoming officers. They attend church and all now have families of their own. Of which they are continuing in much the same vein as they were raised.

The 4 children of the second all dropped out of school after they got into trouble with the Law for truancy and other crimes which resulted in the mother fleeing the state after the oldest, still a juvenile, was charged with a felony as an adult. To my knowledge 3 of the 4 that once pronounced a faith in Christ have now recanted and the other never did make a confession of faith, With at least 2 of the 3 who did now claiming to be atheist. The youngest in typical following suit fashion even wound up being charged with felony arson after setting fire to a church. But he didn’t do it. “He was just with the others who did.”

Get the picture? To be clear, I do NOT write this to undermine the importance of things said by IGTBAM or to downplay the significance of the man being the Head one iota. I FULLY support that. I just wanted to bring to light that it may well all be for naught if the wife is not being the Helpmeet that God intends her to be. And that is especially true when she intentionally goes against God’s designed order and roles.

Like the elephants on ancient fields of battle, it may sometimes injure its own side.

But zeal does not need to be restrained in a wretched, cold, corrupt, miserable world like this.

Zeal, like John Knox tearing down the Scottish monasteries, may hurt the feelings of narrow-minded and sleepy Christians.

It may offend the prejudices of those old-fashioned religionists who hate everything new, and (like those who wanted soldiers and sailors to go on wearing pigtails) abhor all change.

But zeal in the end will be justified by its results.

Zeal, like John Knox, in the long run will do infinitely more good than harm.

There is little danger of there ever being too much zeal for the glory of God. God forgive those who think there is! You know little of human nature.

You forget that sickness is far more contagious than health, and that it is much easier to catch a cold than to give warmth.