The most critical need of the Church at this moment is men, bold men, free men. The church must seek, in prayer and much humility, the coming again of men made of the stuff of which prophets and martyrs are made. —A.W. Tozer

There are many good reasons to oppose masking up—especially in worship. We want to talk about that first.

Perhaps the most obvious and primary reason to refuse is simply that masks don’t work. They are ineffective. Moreover, the people mandating masks know this, as interviews like this demonstrate:

We say ineffective, but analyses like this one indicate that they actually increase the risk of viral infection (by about 13 times):

To submit to masking, therefore, is to publicly agree with a lie. This violates the 9th commandment (thou shalt not bear false witness). To do in the pursuit of worship is doubly egregious. 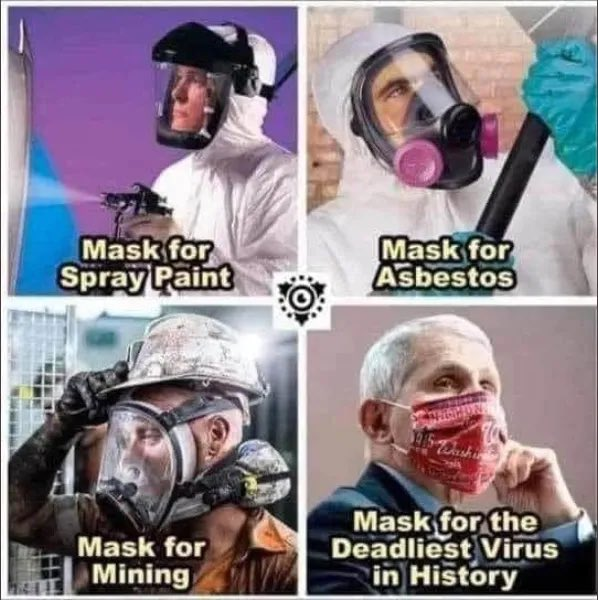 One of the men in Tyrannus Hall shared a good summary of the other sins committed by masking up:

False witness (9th) is just the beginning. Mask mandates violate the authority of a household to care for its own health, violating the 5th.

It impedes singing, speaking, and communicating, imposing a literal veil between worshippers violating the 4th.

It encourages people to think that masks will save them and in this fashion can easily become a totem or “talisman” as medical journals call it. Violating 1st/2nd.

It encourages the avarice of elected officials to exercise powers they do not possess, tempting them to avarice and violating the 4th, 8th and 10th.

There’s another angle that we should consider in approaching this as well. It’s a way of thinking that informs everything we do here at It’s Good To Be A Man—so if it seems left-field to you, but you like most of our content, take the time to consider it, because it stands behind most of the insights we share:

Modern Christianity, following an alien hermeneutic, is often obsessed with determining key prophetic fulfillments—like the mark of the beast.

Scripture’s own hermeneutic, however, presupposes and repeats symbolic patterns that are built into the natural and the human realms.

This doesn’t mean that there is no “the” mark of the beast. But it does mean that if there is, it is an exemplar of a larger prototypical pattern. So we should expect that pattern to repeat in various ways, and with varying importance, throughout history.

If you were to look for a “mark” today, identifying it would be obvious. Something worn by small and great alike, by rich and poor, by those of independent means and wage-slaves…without which none can buy or sell? Something worn on the head, for example, without which you cannot enter a supermarket?

Obviously masks follow this pattern. So what should this tell us about the religious affiliation of people who happily wear them? Revelation 16:2 and 19:20 explicitly links those that received the mark, and those that worshiped his image. Bearing the mark indicates who they worship.

So whose mark is it today? Who demands that they wear it? Who is the “beast” in this case?

It is not the individual stores; they are merely following the edict. The command comes from on high—from the state.

This is why there are Christians who conscientiously oppose wearing masks even if they don’t know much else about them. They aren’t conspiracy theorists, and they aren’t crazy. They don’t think masks are a unique kind of plot, and they don’t think they’re the literal mark of the beast. But they are attentive to patterns.

Most of them know, or can easily intuit, that the stringency of the edict does not match the stringency of the science—to put it mildly. Common sense tells you that. And even if the masks worked, they know that mandates are a wild over-reaction given the actual mortality rates of this disease.

They also know that because human beings were made to worship, they always worship something—just like a clock always tells a time, even if it’s wildly wrong. This is a biblical fundamental with greater depth than most Christians acknowledge, as we discuss here:

Finally, they are attentive to patterns of worship in Scripture. They understand what things like marks and talismans signify. Their reluctance to mask up, and their refusal to do so especially in church, is not a result of cynical skepticism or stiff-necked obstreperousness. Rather, it is because they know that to wear a mask is to publicly signal faith and obedience to the ruler of this world; and simultaneously to deny their reliance and obedience to Yahweh.

They are Christians, not statists—so they will not worship the state.

Here’s a very good article from a source in the UK that goes into further reasons to resist mask mandates:

Their reasons are listed in reverse order as follows:

Along the same vein, Eric Conn remarked this week that it’s well past time to stop pretending we can have good-faith conversations with the wolves in evangelical leadership. Too many Christians are still treating this, and issues like this, as if it were a debate at the good ol’ boys country club.

Don’t be played. This is a street fight for the soul of the church. Guerrilla warfare.

Listen to what people say—but pay much closer attention to what they do. Don’t be found among the vast majority of brothers who are unable to parse repeated bad-faith behavior as such. Love hopes all things, but love is not foolish. You cannot indefinitely hope that ongoing bad-faith behavior is really good-faith error.

Nor is it commendable to do so. On the contrary—it is a functional denial of what Scripture says about how to identify false teachers. It is to choose the way which seems right to a man. We know where that ends. Avoid it.

Ye are of your father the devil, and the lusts of your father it is your will to do. There is no truth in him. When he speaks a lie, he speaks his native tongue: for he is a liar, and the father thereof. But because I say the truth, ye believe me not.

There are shrewd and bold pastors out there. You can learn from them. Here’s an article from one of them on mask mandates. He argues that if you capitulate on this point, you are being hypocritical in your resistance to the principles that are also driving social justice inside the church:

Here’s another symbolic pattern to consider with regard to masks in worship:

But whensoever it shall turn to the Lord, the veil is taken away. Now the Lord is the Spirit: and where the Spirit of the Lord is, there is liberty. But we all, with unveiled face beholding as in a mirror the glory of the Lord, are transformed into the same image from glory to glory, even as from the Lord the Spirit. (2 Corinthians 3:16–18)

We have 41 men on the waiting list for Tyrannus Hall. We will be inducting some of these shortly, so that number will soon shrink. If you’re not on the list, but you’d like to be, you can sign up here: