…but men need a brotherhood; they need a close group united around a shared mission. Men need other men with whom to participate in a common cause, fighting the same war. They need brothers who get it.

Despite movies like Unforgiven, the importance of brotherhood to masculinity can certainly be found in popular culture too. It is deeply ingrained in us, and stories that celebrate it ring true. Consider another famous Western: The Magnificent Seven. What made them magnificent, if not their fraternity? Individually, each was great in his own way, but also a dysfunctional wreck in others. Not one of them alone could truly be called magnificent. Yet together, they polished over each other’s flaws, filled in for each other’s weaknesses, and combined each other’s strengths.

In his article “Sometimes, I Miss War,” Benjamin Sledge captures the male need for brothers on a mission:

I hated war, but strangely enough, I loved it, too. I’d find myself wishing I were back overseas while driving alone, or in the midst of a crowded party. Things were simpler. People understood me. I had deep relationships. Granted, there was no running water, and I defecated in a barrel on a regular basis. But the laughter was real, the friends were real, and the experience felt more real than ordering a coffee at Starbucks while a woman in athleisure berated the barista for getting her order wrong.

Sledge didn’t miss war because he was blood-thirsty. He missed it because he was brother-hungry. In war, he had a clear mission—and a fraternity that kept him company, kept him focused. He had a band of brothers, and in truth that mission and those brothers were more precious to him than his own wife. He writes:

Despite my resolve never to return to a combat environment, I’d signed up once more amid the height of insurgent violence. That deployment would cost me my marriage. I didn’t even have to go. I volunteered. And all because my friends from Afghanistan were going. ‘Would you jump off a bridge if all your friends were doing it?’ my mother would chide as a teenager. ‘Only if all my buddies from Iraq were jumping,’ the now grizzled vet thinks.

Men need the love of men. We are all conditioned into a mindset today that would have been foreign and repugnant to men of old. We see David and Jonathan, and we suspect something is amiss. Their relationship looks “kinda gay.” But it was not; they were dear friends. It is we who have something amiss. Men can be close—very close, like brothers, and even closer than brothers. Deep down, all men long for this brotherhood.

—Excerpted from chapter 13 (The Necessity of Fraternity) of our book, It’s Good to be a Man: A Handbook for Godly Masculinity. 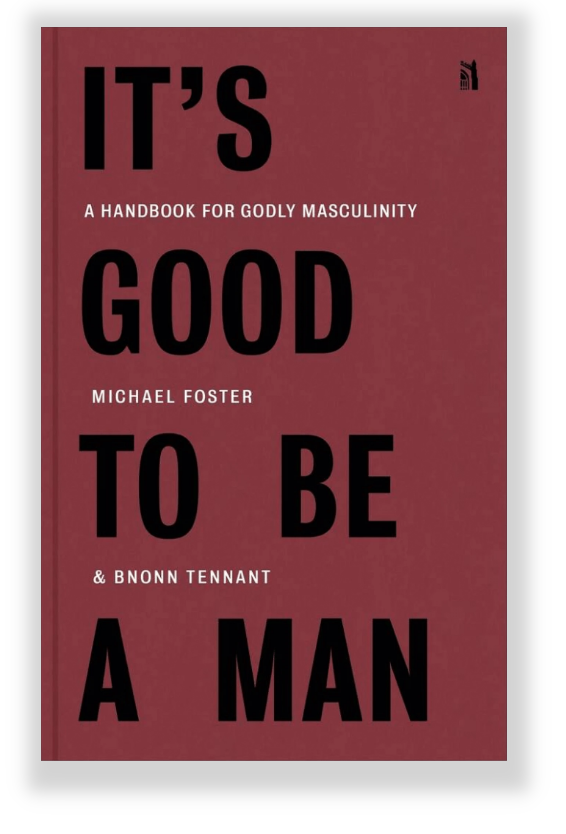 The book is coming out in hardcover at the end of November, and you can now pre-order it from Canon Press here:

Pre-order It’s Good to Be a Man

You can have the form of godliness without its power.

Having your “theological labels” right won’t matter if you lack their substance.

If you try to build a “parallel” culture without first establishing a solid church, in time it’ll be no different than the main culture.

It’s a low view of biblical priorities that got us into this situation. They won’t get us out.

This means our leaders must have godliness with power. But such leaders aren’t going to make themselves. Each of us needs to step up to lead where God has called.

One thing many motivated men need to hear about this, in order to succeed, is that a good leader isn’t an information dispenser. Information is already free everywhere. Rather, good leader provides three things:

Here’s a question from a man in our members group, Tyrannus Hall, that is becoming increasingly common:

Q: I put in for a religious exemption this Tuesday. In it I stated to be exempt from both the vaccination and weekly testings. They approved the vaccine part but not the testing part. And to return back to work I would need to submit a test result or some evidence that one is underway. I have been trying to weigh out if my taking the test would be compromise. I know it ultimately comes down to personal conscience, but I would like to hear your perspective. I am obviously against both, yet they have excused the bigger of the two. Do you think I going too far to still resist on the basis that both were not approved?

The fundamental problem with everything about this is the coercion to participate in something that is false.

Even if all of this weren’t the case, it is also especially false that covid is the kind of threat that justifies testing healthy people, let alone requiring such tests in order for them to continue working. A disease with an infection survival rate between 100% and 99.7% for anyone under 70 (median 99.95%) obviously does not justify such extreme and invasive violations of so many rights.

Every single part of the requirement for testing is false and wicked. Obviously the same applies mutatis mutandis to vaccinations, masks, lockdowns, social distancing, and the entire hysterical medical theater we have been rehearsing for the past 18 months.

The question is what our duties are to God and neighbor when we are thrown into a situation like this. What does God’s law require of his people? How do we represent his interests and image his character as his sons, delivering his requirements to the world, and living according to those requirements ourselves so others can see his resemblance in us?

While I don’t think vaccines are the literal mark of the beast, and I think masks fulfill the symbolic pattern better, I do think what Scripture teaches us through that concept is important for strengthening us against pragmatism:–

Revelation 13:16–17 tells us that all people had to receive the mark so that no one could buy or sell unless they did.

Refusing to take the mark, in other words, resulted in serious economic hardship. How would you feed your family? How would you trade?

There are obvious parallels to our day. Yet Revelation 14:9–11 tells us that anyone who took the mark drank the wine of God’s anger, poured undiluted into the cup of his wrath, and was tormented in fire and sulfur. By contrast, in Revelation 20:4, John “saw the souls of them that had been beheaded for the testimony of Jesus, and for the word of God, and such as worshipped not the beast, neither his image, and received not the mark upon their forehead and upon their hand; and they lived, and reigned with Christ a thousand years.”

What this tells us is that there were real consequences for refusing the mark—often worse than just going hungry. Often it meant death. Yet these are the people who reign with Christ.

I am not going to stand in judgment over another man’s slave, but for my own part, I cannot participate in what I know is false, because I would be cutting myself off from the Truth, who is my Lord and Savior. So I will never take a PCR test. I have never worn a mask. I will die before I get the vaccine. And I will flout lockdowns to worship freely if I can find a place to do so. I believe that is my obligation before Christ.

Resistance to tyranny is obedience to God, and all it takes for evil to flourish is for good men to go along with it.

Like a muddied spring or a polluted fountain is a righteous man who gives way before the wicked. (Proverbs 25:26)

Therefore, to one who knows the right thing to do and does not do it, to him it is sin. (James 4:17)

Stay strong. Set your face like flint. We truly feel the weight of these decisions alongside you, and we are enormously proud of the men who are making hard adjustments and taking body blows for the sake of honoring our Lord Jesus.