Political correctness is communist propaganda writ small. In my study of communist societies, I came to the conclusion that the purpose of communist propaganda was not to persuade or convince, not to inform, but to humiliate; and therefore, the less it corresponded to reality the better. When people are forced to remain silent when they are being told the most obvious lies, or even worse when they are forced to repeat the lies themselves, they lose once and for all their sense of probity. To assent to obvious lies is in some small way to become evil oneself. One’s standing to resist anything is thus eroded, and even destroyed. A society of emasculated liars is easy to control. I think if you examine political correctness, it has the same effect and is intended to. —Theodore Dalrymple

They are out there to police the masses and make sure they toe the line. They truly believe they are better than you. Morally superior. Intellectually superior.

When they talk about how you need to be better, they mean “be like me.”

Until the weight of the law comes behind it, this is stuff that only works on insecure people who want to be liked by those who hate them.

Unfortunately, because so many people are insecure and want to be liked by those who hate them, these tactics are starting to get the weight of the law behind them.

Beware of safety. It’ll get you maimed or killed.

News is 99% propaganda at this point. Pick up a book instead, preferably an old one. Protect your mind. Here are some shorter reads you won’t regret:

What believers and churches will we unite with?

…we can probably make it work.

Western Christians are facing their first really serious challenge in pagan, over-reaching nanny states. Now is the time to hit pause—pause, not stop—on our secondary debates, and protect our basic rights.

It’s the willingness to see things that others don’t want to see.

(It’s also not the willingness to see things that aren’t actually there just because other people deny their existence.)

In view of cultivating discernment, here’s a wise question to ask, courtesy of Matt Williams:

Why is it that the “establishment” has assigned to Covid any and every death they possibly could, no matter how implausibly (we have even seen people who died in car accidents listed as Covid deaths because they had recently tested positive)…and then, conversely, why is it that exactly the opposite strategy is being used of the vaccines?

Vaccine passports will be a way to “fence in” dissidents who won’t get with the program that is the Great Reset.

“Sorry, sir, your records aren’t up to date. You’ll need to get them updated before shopping at Walmart. We look forward to your return visit.”

People tend to think any rhetoric that inflames them is inflammatory rhetoric.

Maybe the rhetoric is the problem.

But maybe they are.

Don’t aim to be a “hero” to your sons. Ultimately, they will discover that it’s a lie, and they will resent you for it. Aim to be an example of a flawed but repentant man pursuing holiness and the fear of God. That’s what they need.

Bnonn talked to Paul Facey on the topic of Patriarchy for Pentecostals. The interview went pretty long, which is usually a good sign. A few highlights:

Michael was interviewed by Joel Settecase on the Think Institute’s podcast. The topic was “Patriarchy & Masculinity—Here’s What You Need To Know.” They covered:

Bnonn was also interviewed by Jared Sparks on the Shepherd’s Crook Podcast. They covered:

An excerpt from chapter 9 of our book: #

A man’s mission will veer off course and eventually crash if it does not run on the right relational rails.

The film opens with a title card playing against the backdrop of William Munny burying his wife, Claudia. We learn that Munny was once “a man of notoriously vicious and intemperate disposition.” It broke the heart of Claudia’s mother that her daughter would marry “a known thief and murderer.” But it turns out that Will has been reformed. It was not he who took the life of his beloved wife. It was smallpox.

Will is visited by the Schofield Kid, an upstart hired gun, who wants a partner to help him collect the bounty on two cowboys that cut up a prostitute. But Will turns the offer down, saying:

“I ain’t like that anymore, Kid. It was whiskey done it as much as anythin’ else. I ain’t had a drop in over 10 years. My wife, she cured me of that. Cured me of drink and wickedness.”

This theme comes up repeatedly in the movie. While talking with his good friend, Ned Logan, Will regretfully remembers one of the men he murdered. Ned reminds Will that “you ain’t like that no more.” Will agrees, but a cloud of unforgivenness weighs on him. In his fantastic 2002 review of the film, Roger Ebert wonders, “Does Munny still seek forgiveness from his dead wife, and the others he wronged? There is a sense that he is still haunted by guilt: He has reformed, but has not made amends.” Ebert elaborates:

“William Munny is a chastened man, a killer and outlaw who was civilized by marriage. Thus “Unforgiven” internalizes the classic Western theme in which violent men are “civilized” by schoolmarms, preachers and judges. When he talks about his wife, Munny sounds like a contrite little boy, determined not to be bad anymore.”

We’ll come back to this.

For now, needless to say, Will is shadow of his former self: old, tired, and unable to even rightly saddle a horse. No longer a deadly gunslinger, he and his two kids barely subsist on a failing hog farm. The only way he sees forward for his household is to take one last job—even though he is unfit for the mission. He reluctantly agrees to help Schofield on the condition that his old friend Ned can aid them in the undertaking.

Things don’t go as planned. Schofield is incompetent due to poor eyesight. Ned can’t bring himself to kill any longer. Will and the kid manage to clumsily assassinate the two cowboys—but Will turns ill, and get ruthlessly beat up by the town sheriff, Little Bill. When he awakens from his sickened stupor, he discovers that Little Bill has captured, tortured, and killed his friend Ned.

Will starts to drink again. Slowly he transforms into the man he once was: a more villainous version of Eastwood’s “man with no name” character from the famous Sergio Leone Westerns. He is a tough and focused loner, with a self-defined sense of justice. Schofield recognizes that Will is a dangerous man on a mission, and fearfully offers the entire bounty to him. Will says, “You don’t have to worry kid. I’m not going to kill you. You’re the only friend I got.” Schofield departs. And Will heads into town to get his revenge. He single-handedly kills Little Bill and four of his henchmen.

One of the noteworthy things about this movie is how Will evolves into an unstoppable man on a mission as he becomes more and more isolated: wifeless, without a true friend, and far from his household. This has become a trope of many action movies: the notion that becoming truly alone is the necessary catalyst to becoming truly elite. John Wick, The Equalizer, Man on Fire, The Dark Knight Rises, Casino Royale, The Matrix, Equilibrium—all of these movies, in some way, teach us that a man must be stripped of everything he relies on except himself, he must be torn down to his “pure” identity, he must become a completely self-reliant individual with neither rope nor safety net, in order to overcome the great adversity, to attain the great thing, to achieve his great mission. Another related, and fascinating example, that deserves more analysis than we can offer here, is Breaking Bad—where the more manly Walter White becomes, the more mission-focused, the more he drives his household, and ultimately everyone, away.

But this is all a lie; a confusion. Isolation kills mission.

Excerpts from the 1648 deliverance of the church of Scotland, “Act for Censuring Ministers for their Silence, and not Speaking to the Corruptions of the Time,” courtesy of Shane Anderson:

The Generall Assembly, taking to their serious consideration the great scandals which have lately encreased, partly through some ministers, their reserving and not declaring of themselves against the prevalent sins of the times, partly through the spite, malignity, and insolency of others, against such ministers as have faithfully and freely reproved the sins of the times without respect of persons…

Such as shall be found not applying their doctrine to corruptions, which is the pastorall gift—cold, and wanting of spirituall zeal—flatterers, and dissembling of publick sins, and especially of great personages in their congregations—that all such persons be censured according to the degree of their faults, and continuing therein be deprived.

…Tis also hereby recommended to the severall Presbyteries and Provinciall Synods, that they make speciall enquiry and triall concerning all the ministery in their bounds; and if any be found too sparing, generall, or ambiguous, in the foresaid applications and reproofs, that they be sharply rebuked, dealt with, and warned to amend, under the pain of suspension from their ministery.

…if there be any who do neglect and omit such applications and reproofs, and continue in such negligence after admonition and dealing with them, they are to be cited, and, after due triall of the offence, to be deposed—for be ing pleasers of men rather then servants of Christ—for giving themselves to a detestable indifferency or neutrality in the cause of God, and for defrauding the souls of people; yea, for being highly guilty of the blood of souls, in not giving them warning…

And in case any minister, for his freedom in preaching, and faithfull discharge of his conscience, shall be, in the face of the congregation or elsewhere, upbraided, railed at, mocked, or threatened—or if any injury or violence be done to his person—or any stop and disturbance made to him in the exercise of his ministeriall calling, the Presbyterie of the bounds shall forthwith enter in processe with the offender, and whoever he be, charge him to satisfie the discipline of the Kirk by publick repentance; which if any do not, or refuse to do, that then the Presbyterie proceed to excommunication against him.

Source: https://www.british-history.ac.uk/church-scotland-records/acts/1638-1842/pp166-200#h2-0017. How times have changed. Today you’re much more likely to see ministers censured for speaking against corruption than for staying silent. 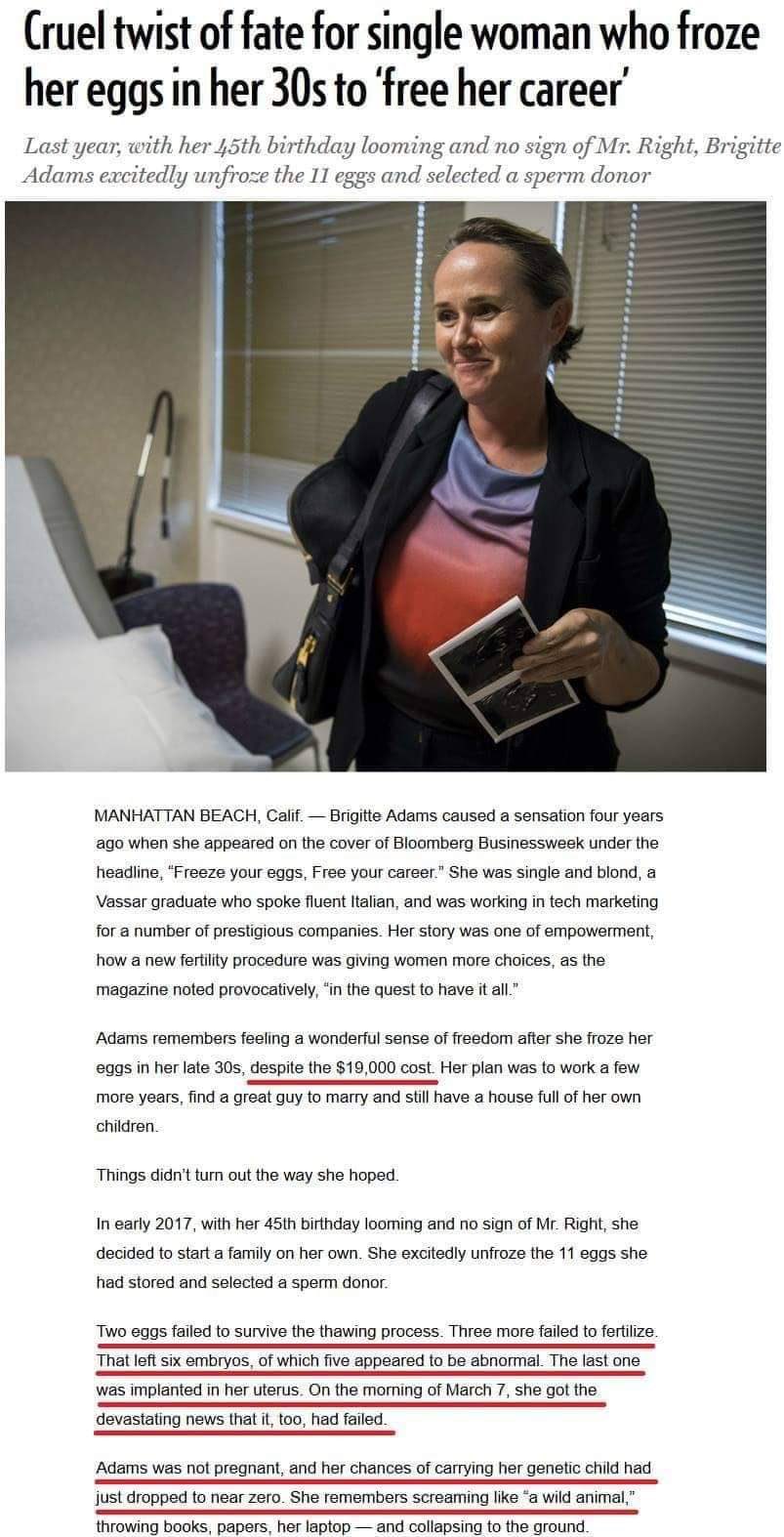 There is a reason the Westminster Larger Catechism calls “undue delay of marriage” a sin.

Feminism is a brutal, woman-hating doctrine that deceives women to swindle them out of what they truly want until it is too late.